Reading and Writing the World with Mathematics: Toward a Pedagogy for Social Justice 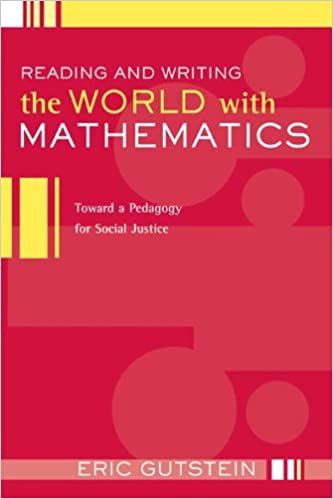 Title Of The Book : Reading and Writing the World with Mathematics: Toward a Pedagogy for Social Justice

Dr. Bülent Avcı is a public educator in Washington State in the U.S. His research interests include equity and justice in math education, democracy and math education, and the dialogic teaching of math to counter neoliberal hegemony. He is the founding member of Critical Education Network (CEN). He publishes research articles in academic journals and is the author of the book Critical Mathematics Education: Can Democratic Education Survive under Neoliberal Regime? He can be reached at bavci@fwps.org and mjura41@hotmail.com

To cite this book review:

Bulent, B. (2022). Freire and Mathematics Education [Reading and Writing the World with Mathematics, by E. Gutstein]. Rethinking Critical Pedagogy, p.36-40

This is one of the few books in the literature of critical mathematics education (CME), a new but growing domain of study. The book is based on Eric Gutstein’s classroom teaching experience in a low-income middle school in Chicago, where most of the students were Latino. Gutstein states that his research methodology was practitioner-action research as framed by Anderson, Herr, and Nihlen (1994). While the book under review makes no connection with the research methodology of Paulo Freire, Gutstein does nevertheless draw on other aspects of Freire’s thought. Indeed, the main theme of the book is teaching mathematics for social justice.

There are eight chapters. The first two encapsulate the research and theoretical framework for teaching math for social justice. The others draw on student journals, teacher-student conversations, and classroom observations to show how teaching mathematics can develop a sense of agency and sociopolitical consciousness.

For Gutstein, the larger sociopolitical context is the U.S., specifically, an unjust society that produces a number of injustices in education. The root causes of these injustices are racial inequality and race-based discrimination. In other words, the prime unit of analysis in this book is racial and ethnic discrimination in education.

The book is critical of the National Council of Teaching Mathematics (NCTM). Gutstein argues that the NCTM’s approach to justice and equity is superficial, limited to merely having access to quality mathematics education. The NCTM fails to distinguish between functional and critical literacy, and thereby fails to connect the equity question in math education to the larger society. Gutstein argues that critical mathematics literacy is key to developing a sense of agency and sociopolitical consciousness.

In Gutstein’s view, American society is divided into two parts: whites, who are privileged (the oppressors), and non-whites (people of color such as Latinos), who are unprivileged (the oppressed). He argues math education emphasizing critical literacy can provide students the opportunity to develop a sense of agency and consciousness oriented toward justice and emancipation.

The book is a welcome addition to the CME literature. However, it raises a number of serious issues that cannot be ignored.

First, Gutstein claims to have been inspired by Paulo Freire. The key ideological-pedagogical point of Freire is dialogic pedagogy. Freire (2013) makes it clear that dialogue is an existential necessity and, moreover, is the opposite of propaganda: “Propaganda, slogans, myths are the instruments employed by the invader to achieve his objectives…. True humanism [and humanizing education], which serves human beings, cannot accept manipulation under any name whatsoever, for humanism there is no path other than dialogue. To engage in dialogue is to be genuine.” (p. 101)

As described in the book, however, teacher-student conversations are far from dialogical. Students are not invited to argue their own thoughts and ideas. Rather, a set of ideas is imposed top-down. It is more ideological indoctrination than dialogical pedagogy.

Second, it seems that the second chapter of the book is not written by the same person who wrote the rest. Chapter 2 puts great emphasis on Freire. The rest of the book, however—and in particular the ethnographic data Gutstein draws upon—reveals no trace of how Freire enacted dialogical pedagogy in teaching. Instead, the book presents yet another version of traditional teaching in which the teacher has pre-made agendas that are duly imposed on students.

Third, it is worth noting that social justice and equity are misunderstood and therefore often-exploited concepts. Neither is neutral: depending on one’s political-ideological stance, they take different and contradictory shapes. The concept of justice is generally based on either liberal or Marxist points of view—the ideologies are drastically different from each other. The author fails to provide a working definition of social justice and equity in the educational context let alone substantiate them through classroom teaching projects.

Fourth, the driving force of social, political, economic, and cultural life for the last forty years has been neoliberal ideology. As such, it is odd that the book makes no mention of neoliberalism or its implications for education. For example, Gutstein appears to have no problem with educational corporate colonization in general or standardization in math education in particular. He wants students to develop agency for justice yet does not see anything in the neoliberal system that brings about injustice in the first place.

Fifth, the author’s definition of class and ethnic identity seems to be based on Max Weber’s (identity politics), and it resonates with neoliberal ideology. Let us assume that Gutstein’s Latino students have developed a strong sense of agency and the consciousness that privileged white people oppress people of color. What are these students to do? Are they going to straighten all white people up?

One does not have to look very hard to see that the U.S. is a class-divided society. Of course, racial discrimination is a big part of justice issue in America. However, class, not race, is the central global concept necessary to explain the human condition, as it encompasses oppression, equality, and freedom (Darder & Torres, 2009). In the U.S., neither communities of whites nor communities of people of color are homogenous. Within each community, there are poor, working-class, middle-class, and upper-middle-class people, as well as some who are super rich. And as long as the capitalist system is around, the America will continue to be a class-divided society.

When Latino students are fully equipped with a critical mathematics literacy and consciousness, how will they account for middle- and upper-middle-class Latinos and people of color? If ethnic background is the main obstacle to success in professional and private life, how to explain the fact that people of color take up important positions in politics, business, and bureaucracy? Among many other examples, the current secretary of education, Miguel Cardona, comes from Latino background. Similarly, if white people are privileged, how to explain the increasing number of poor-white people in the U.S.? Or the number of poor-white students in public schools?

With respect to education, the same holds true. Research from opposite perspectives agrees: the single most important factor in student success is socioeconomic background. Higher socioeconomic status is the best predictor of academic success.

It is not clear in what ways Gutstein’s approach to justice and teaching will lead to a more just and equal societal order. One can foresee, however, that the ways in which he explains justice and equity in his classroom practices, his students may develop a sense of ethnic pride and potentially chauvinism.

Finally, if one claims to be inspired by Paulo Freire, one should internalize Freire’s views. Friere encourages us to find unity in diversity; he reminds us that the things that bring us together and make us human—universal values—are much stronger than the things that separate us. If we want students to develop consciousness, top priority should be given to class consciousness so that poor students (and people) from all racial, ethnic, and cultural backgrounds can come together to fight against the handful of rich elites, and thereby make world a more just, more equal, and more democratic place for all.