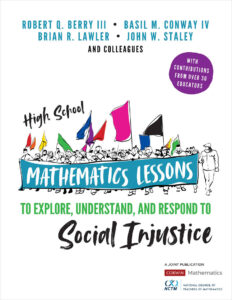 Title Of The Book : High School Mathematics Lessons to Explore, Understand, and Respond to Social Injustice

The book confidently announces that it is for all teachers, teaching coaches, administrators, school district managers, teacher educators, and “private education companies” who wish to address social injustice in math classes. Based on the Preface, the book was written to answer the question, “How might we empower students to use mathematics to explore, understand, and respond to social justice?”

As a math educator and researcher whose teaching and research mainly focus on critical mathematics education, what follows is something more than a brief book review. The matter is close to my heart.

The book has a long introductory section that includes the overall framework, short biographies of contributing authors (and their pictures), lesson plan formats, and standards of social justice. Drawing on the notion of “best practices,” the lesson plans in the book often use the phrase, “What you notice and what you wonder.” If you are a public school teacher in the U.S., you have probably heard this phrase many times in staff meetings, professional development days, and educational workshops: you are asked to notice and wonder about things imposed from above—but, it should be emphasized, you are not otherwise free to notice and wonder about things that could be categorized as “inconvenient truths.” When we read the book carefully, however, the first thing we notice is that it brings together many unmatched, inconsistent pieces, such that the result is contradiction and confusion.

The book is written in response to injustice in America. We would therefore be justified in assuming that the authors recognize that the U.S. is not a just society. But to challenge injustice is by nature a political act; as such, it must be guided by a worldview or ideology. Generally speaking, the ideology can be either liberal or Marxist (or their various derivatives). These two approaches differ radically from each other.

The book is written from a neoliberal perspective that for decades has been the dominant ideology in U.S. education. Evidence of its neoliberal perspective include (a) how it frames the main themes of lessons, (b) scripted lesson plans, (c) obsession with standardization, and (d) language inspired by “best-practice” rhetoric. The problem is that over the last forty years it is the ideology of neoliberalism that has shaped education. One must conclude that current injustices in education have as their root causes neoliberal policies themselves. How could injustices in education be remedied by the worldview that produced them in first place? It’s as if the government appointed the Corleone family to oversee casinos.

The book includes a framework outlining its main pedagogical sources, citing critical mathematics educators (CME) such as Ole Skovsmose and Marilyn Frankenstein (p. 21). Unfortunately, for those familiar with the CME and the critical pedagogy (CP) literature, it is obvious that that these sources appear mainly for cosmetic and marketing reasons: there is no indication that the writers have carefully read and understood them. Had done so, they would have known that CME is highly critical of standardization and the corporate colonization of education; they would have known that their lesson plans flatly contradict the ideas of Skovsmose, whose number one suggestion is to move away from the official curriculum in order to practice CME.

The same paragraph cites with approval both Eric Gutstein’s work on teaching math for social justice and the understanding of equality advanced by the National Council of Teaching Mathematics (NCTM). These make strange bedfellows, as Gutstein is actually very critical of the NCTM’s perspective on equality. It is also astonishing that the book mentions the “banking” model of education (p. 21) without mentioning Paulo Freire. Even worse, it contextualizes the banking model as if it were the desired pedagogy for teaching justice-oriented mathematics. Similarly, the concept of “problem-posing education” is cited as if it belongs to someone else—not Freire. As a helpful gesture, I would like to respectfully suggest that the writers reread Freire’s books, as well as other works in the CP and CME literature, and reimagine social justice in the context of education.

I have already mentioned the NCTM, and indeed the book often uses the NCTM’s imprimatur. From its front cover to its lesson plans, the NCTM logo appears everywhere—even the Preface was written by current and past presidents of the NCTM. This tells us something about the authors’ underlying philosophy, however, because the NCTM enthusiastically promotes neoliberal polices and implementations. Indeed, the NCTM tends to reject ideas, research articles, conference proposals that are critical of neoliberal policies. I speak from experience. When I submitted a classroom-based research article—part of my first book published by Brill[1]—to an NCTM journal, the editor informed me that although the article was “very good” scholarly work, they do not publish studies that are of critical nature.

One might also mention the following curiosity. As mentioned, the present book claims affinity with pioneering CME researcher Marilyn Frankenstein in its use of math to address social injustice. In her work, however, Frankenstein is critical of the neoliberal philosophy endorsed by the NCTM, [2] and the NCTM actually turned down a conference proposal she made. It would seem that the authors would like to have it both ways.

As noted, the present book contains a number of illustrative math lessons. None of the lessons, however, is attached to a grade level or a course—we aren’t even told if a given lesson is intended for algebra, geometry, or pre-calculus. Even worse, the lessons have clearly not been peer-reviewed, by which I mean that a group of teachers teach the lesson several times, gathering data and feedback in order to revise and improve the lesson. But I guess it would be costly and thus make no sense in a world driven by neoliberal values.

Based on the lesson plans in the book, the writers seem to be largely unaware of the dynamics and difficulties of classroom teaching practices imposed by the standardization movement. High school math teachers are required to follow a packaged curriculum, linking their daily lessons to common-core (CC) standards. If they don’t, they may face disciplinary consequences.

It is well known that the CC standards—although they pay lip service to “real-world issues and challenges”—make not a single reference to concepts such as justice, equity, citizenship, or democracy.[3] This raises another question. Have the past and current presidents ever wondered how NCTM could promote math education for social justice given that the CC State Standards (CCSS) make no reference to such a concept? In light of the discrepancy, should the NCTM challenge CCSS to revise its standards so that teachers can link their justice lessons to CC standards? Of course, that might be unrealistic: perhaps CCSS has some hegemonic power that makes it difficult or impossible for the NCTM to be independent and objective. It is interesting to note that once upon a time, NCTM developed a set of standards for math education to protect public (math) education from top-down imposed corporate standardization. What happened to these standards?

Justice is not a neutral topic. It is a difficult and daunting process to integrate social justice issues into lessons, especially math and science. For example, racial injustice is defined differently from different ideological points of view. From a neoliberal perspective, racism is a personal matter (an internal problem of some white people), whereas from critical theory’s point of view, racism is strictly related to capitalism and imperialism, as it is evident from the role of capital in the formation of slavery.  If a book aims to help students to develop a sense of social justice in math, it should, in addition to its pedagogical standpoint, clearly state its political, ideological, and ethical perspectives. That would seem to be a minimum requirement in order to explain what justice is and what injustice is. For example, if a book cites Freire with approval in its early pages but later presents lesson plans inspired by anti-Freirean pedagogical theories and practices, it would seem fair to say, “We have a problem, Houston.” That indeed is the case here. Included is a lesson plan that aims to motivate students to help Apple produce iPhone 8s more cheaply (p. 155). That lesson’s designation? “Social justice.”[4]

As one who has practiced CME for many years, I would like to close by making some positive suggestions. First, a book aimed at teaching mathematics for social justice should address neoliberal standardization and privatization processes that have resulted in schools colonized by corporate agendas. Second, such a book should exemplify dialogic pedagogy. Third, real-world problems should be, in Frankenstein’s word, real real-world problems, created so that students can relate them to their life in and out of the classroom. For example, privatization and standardized assessment should be problematized in terms of justice and equality. Fourth, lessons should be designed to ensure that they are aligned with collaborative learning in small groups so that students can express their opinions, even unpopular ones. The teacher’s role, meanwhile, should be facilitator and equal participant. Indeed, the facilitation process itself should be an instantiation of justice, whereas transmitting knowledge and information “about” justice is hardly that. In short, a book aimed at teaching math for social justice should be oriented toward social justice, making the classroom a community of learners and thereby democratizing classroom life.